A competition hosted by the Dallas CityDesign Studio, an office of the City of Dallas, in partnership with The TrinityTrust Foundation, Downtown Dallas, Inc. and The Real Estate Council Foundation and organized in two streams: Professional and Open.

The Challenge is meant to build awareness of urban design solutions capable of shaping Dallas forward, develop a more refined and specific strategy for connecting the downtown and river, and assist in securing future public and private investment. The following solution was selected as a finalist among other three, at the Open Category.

SITE: “Dallas is the third largest city in the state of Texas and the ninth largest in the United States, with a population of 1,197,816. At the center of Dallas, within roughly a 3mile radius of the Trinity River, population numbers are 177,345, with a density of 5,088 people/square mile. Downtown is experiencing rebirth and rejuvenation with a resurging downtown population and a daytime workforce of 135,000. The celebrated Dallas Arts District, coupled with a series of new urban parks, is championing a more vibrant and sustainable downtown environment.” - from the competition brief. Site area: 238ha / 588acres

PROPOSAL: “Bridging on steroids’... draws many new links animated with energy, ecology and fascinating juxtapositions. But these are bridges for people not for cars.“It pays homage to Kessler and the original intent of the city… very appealing and as it speaks to the character, structure and form of the city” - from the Comments of the Jury

The intention of connecting the city to the river can be seen in drawings from the early 19th century. George Kessler followed this intention in his city plans, which envision Dallas expanded until the edge of the riverbed. He also proposed two main connections to the other riverside, placed as a continuation of the urban fabric.

The current proposal follows this intention, and adds a new one by which the habitat of the river is expanded towards the city. Thus, the site, situated in between those two environments, is influenced by them in equal measure. The areas themselves are divided in two: one half is occupied by plots for constructions and roads, and the other half is covered with vegetation and pedestrian walkways.

The elevated walkways create a flow of circulation from the city into the riverbed by passing over the freeway and railway infrastructure and also over the levee. They create a secondary pedestrian circulation layer by connecting the lower levels of the proposed buildings and descend on the ground level of the riverbed. Their second role is to sustain an irrigation system which brings water from Trinity River into the site. This water is used once, to sustain eight parks, and second, to transform the areas adjacent to the freeway infrastructure (inaccessible and not suitable for building) into one large green area.

“The Challenge area is also the home to some of the most significant freeway infrastructure within Dallas. Multiple freeways converge in this area creating vital regional connections that have influenced Dallas’ growth since the late 1960s. They are significantly important as a part of the larger North Texas highway system. Their functionality is key to many areas of our city and their presence has influenced the development of this area for decades.” - from the competition brief. 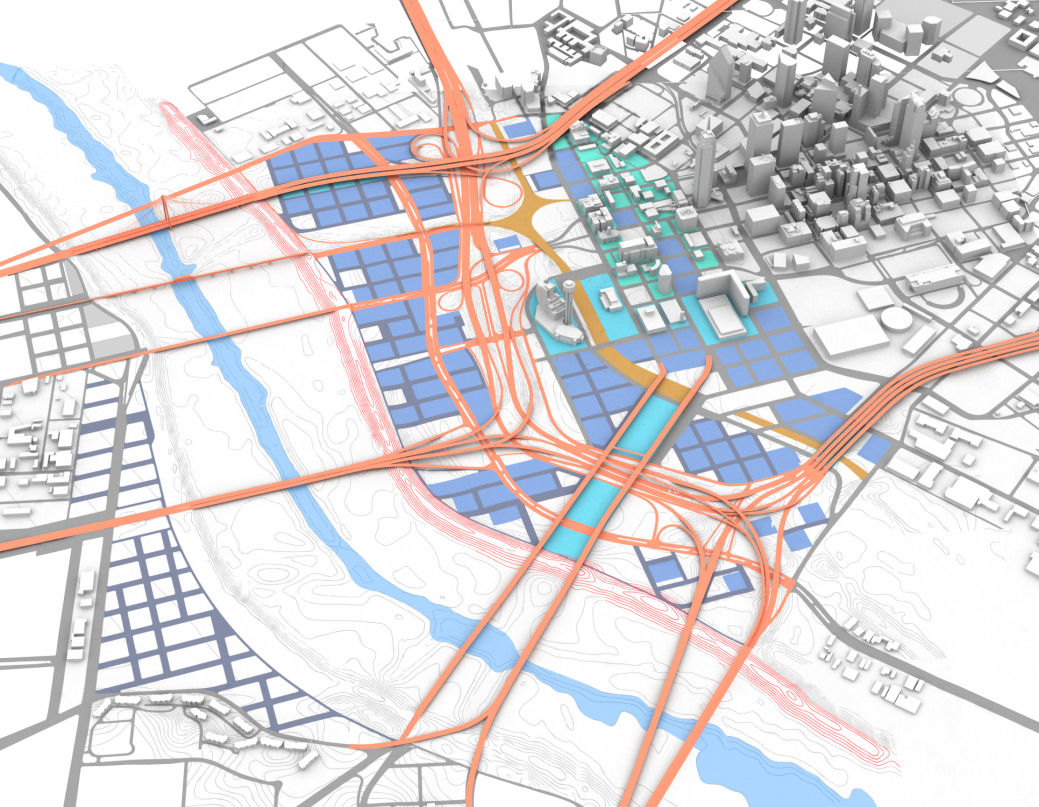 Continuing the silhouette of the existing downtown a new line of high volumes (+260M) are proposed on site.  It can be extended on the other side of the river 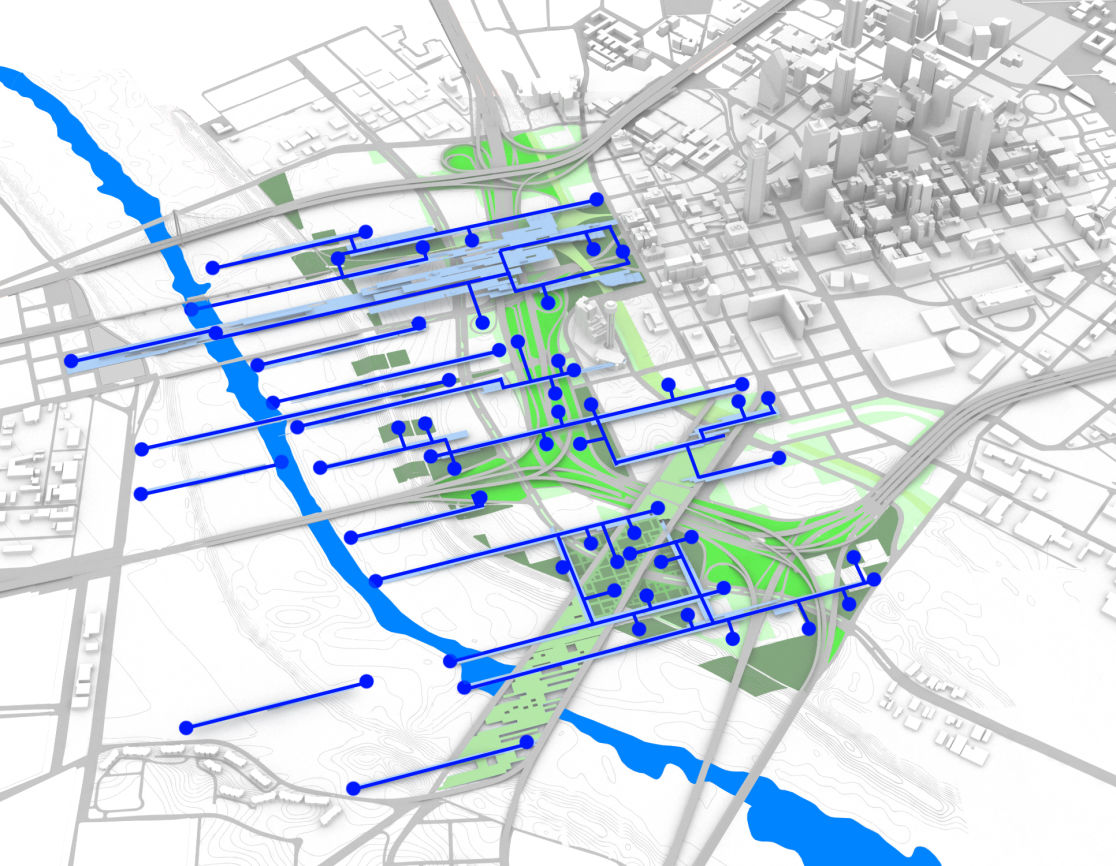 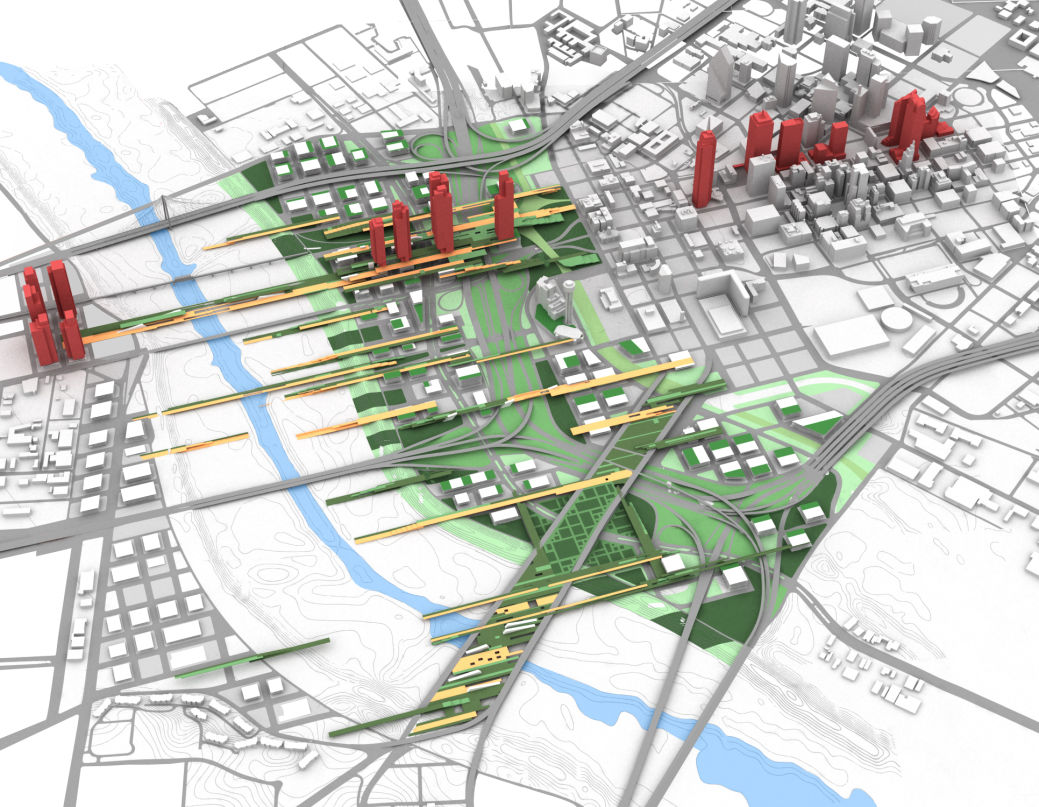 The rectangular urban fabric, characteristic for the city of Dallas is extended into the site. 96 plots suitable for construction emerge. A small number of existent plots are reconfigured. 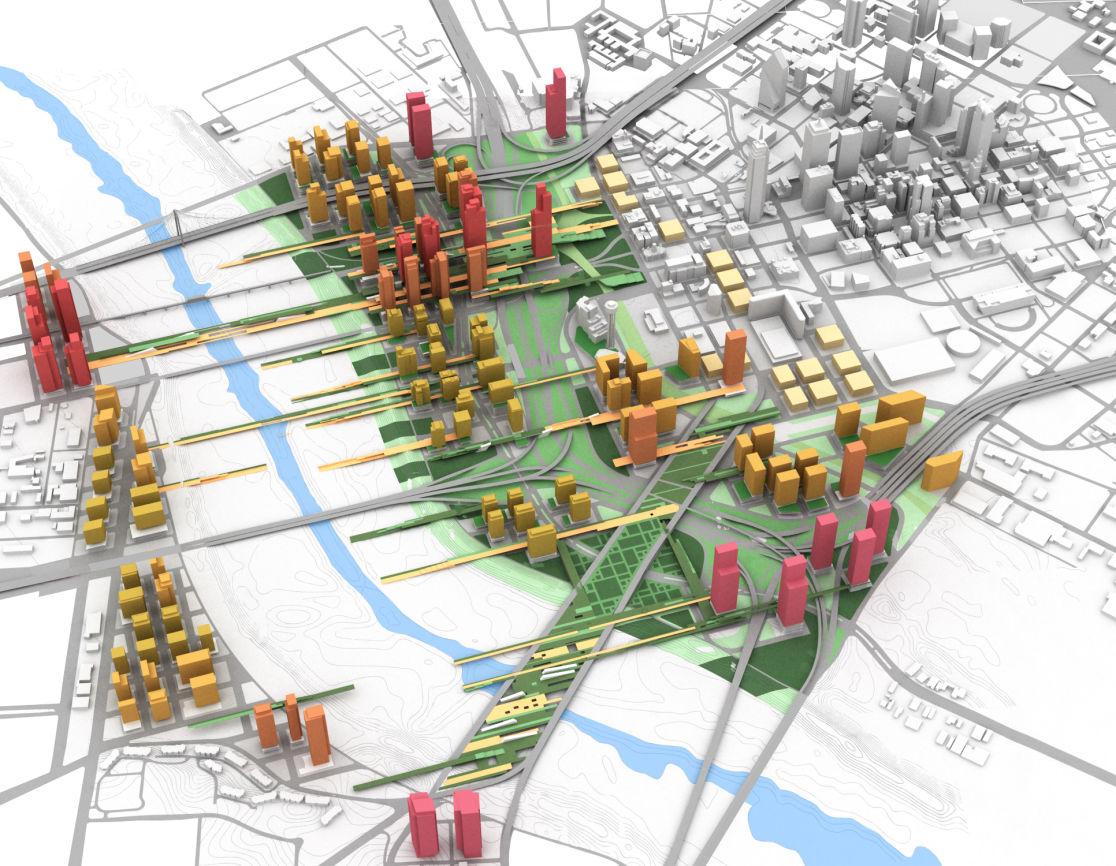 iew with all the buildings on site, colored by height. Orange and yellow buildings range between +90M and +180M. Low height buildings (+30M) are proposed in the West End Historic District. 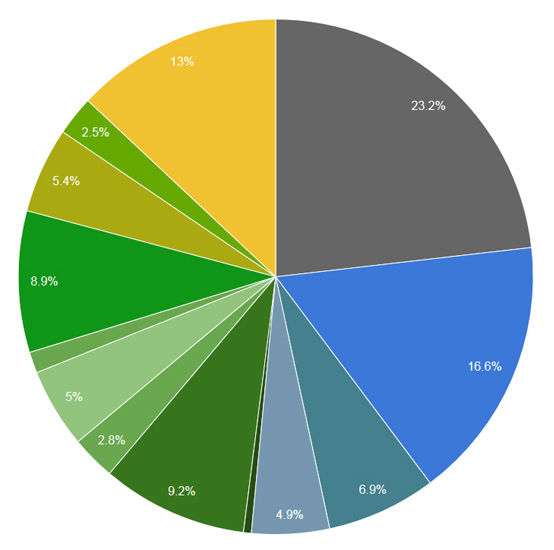 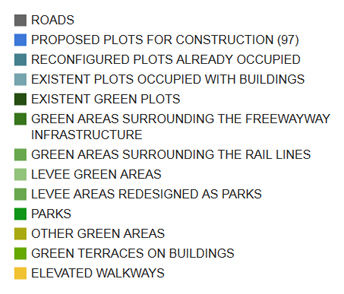