The project site is situated between Vaster and Klostergarden, an area which now lacks a proper connection to the city and fails to link the two neighborhoods. Total site area is about 60 hectares. In order to find a coherent solution that relates to the city and nearby areas, an urban analysis was conducted as follows:

The residential land and the roads were extracted from the Lund city plan. They clearly show the lack of urban fabric in the area and the vast surface that can be restructured. On the East and South, Klostergarden residential complex build in the 60s, could offer a good opportunity for new urban relations.

On the West and North, on the contrary, the land is occupied by large industry related areas or green fields (Lund Business Park and Wastewater treatment plant).

New major roads were drawn in the continuation of Nordanvag, Sunnanvag and Skanevagen in order to insure a proper South - South - West connection. Of special importance is Vastanvag connected to Hogevallsgatan which could offer a good NE - SW connection and a direct link to the city center trough Stadsparken. A good location for residential plots was found to be in the center and South - West of the site area, following the major directions of the 8 story apartments built in the 60s. They can get up to 7.3ha.

City plan showing the residential land use and the location of proposed residential clusters (7.3ha)

The roads of Lund (in black) and the proposed connections (in red).
The new roads have 5m wide sidewalks that incorporate bicycle paths and plantation.

A further study of the nearby neighborhoods, Vaster, Klostergarden and Jarnakra-Nilstorp was conducted in order to clarify their character, defined by density and proportions between land usage. Vaster and Jarnakra-Nilstorp appear to be similar in this sense with 36% of the land occupied by residential plots with a relatively low density. The floor area ratio (FAR), which was calculated based on the number of levels that residential buildings have, is also low: 0.64, 0.5. Industry and green areas (parks, gardens, etc) are to be found in equal proportions. The Klostergarden neighborhood stands in contrast, with more than half of its surface occupied by green land and no industry. Even though the residential land use is less than a quarter, the density is much higher, situated around 1.1.

Above: a study of the nearby neighborhoods: Vaster, Klostergarden and Jarnakra-Nilstorp. (The residential buildings are marked in black).

To create interest at urban scale, a series of measures are proposed: Create a link to the center of the city throughout Stadsparken and continued on the Vastanvag which is slightly adjusted. Along this NE - SW connection on each side, a series of buildings and areas of public interest already exist or can be proposed in the future.

At the beginning of this new route stands Stadsparken and the Högevallsbadet. They are followed by an existing commercial point which can be developed into an information center and pietonal/bike passage over the rail tracks. Next, the route passes by the existing Sparbanken Skåne Arena and Klostergårdsskolan. On the opposite side, a large commercial center is proposed. The existing green area which stands between the Klostergårdsskolan and the Klostergarden residential complex could be transformed into an urban park, spanning in the NW-SE direction, followed by the future Rail Station. The Rail Station itself should become a crossing point for bikes and pedestrians moving West. Towards the end of this route a multifunctional building is proposed, together with a large urban plaza spanning perpendicular to the rail tracks connecting the NW-SE areas.

Beyond the last proposed residential plots, the route ends with an Activity Park hosting a flower garden, the existing bathhouse, a greenhouse complex, a large sports club to the West and some additional sport fields to the East. This could become a good spot for a Ferris Wheel with a wide view over the natural wild area surrounding the Höje River. 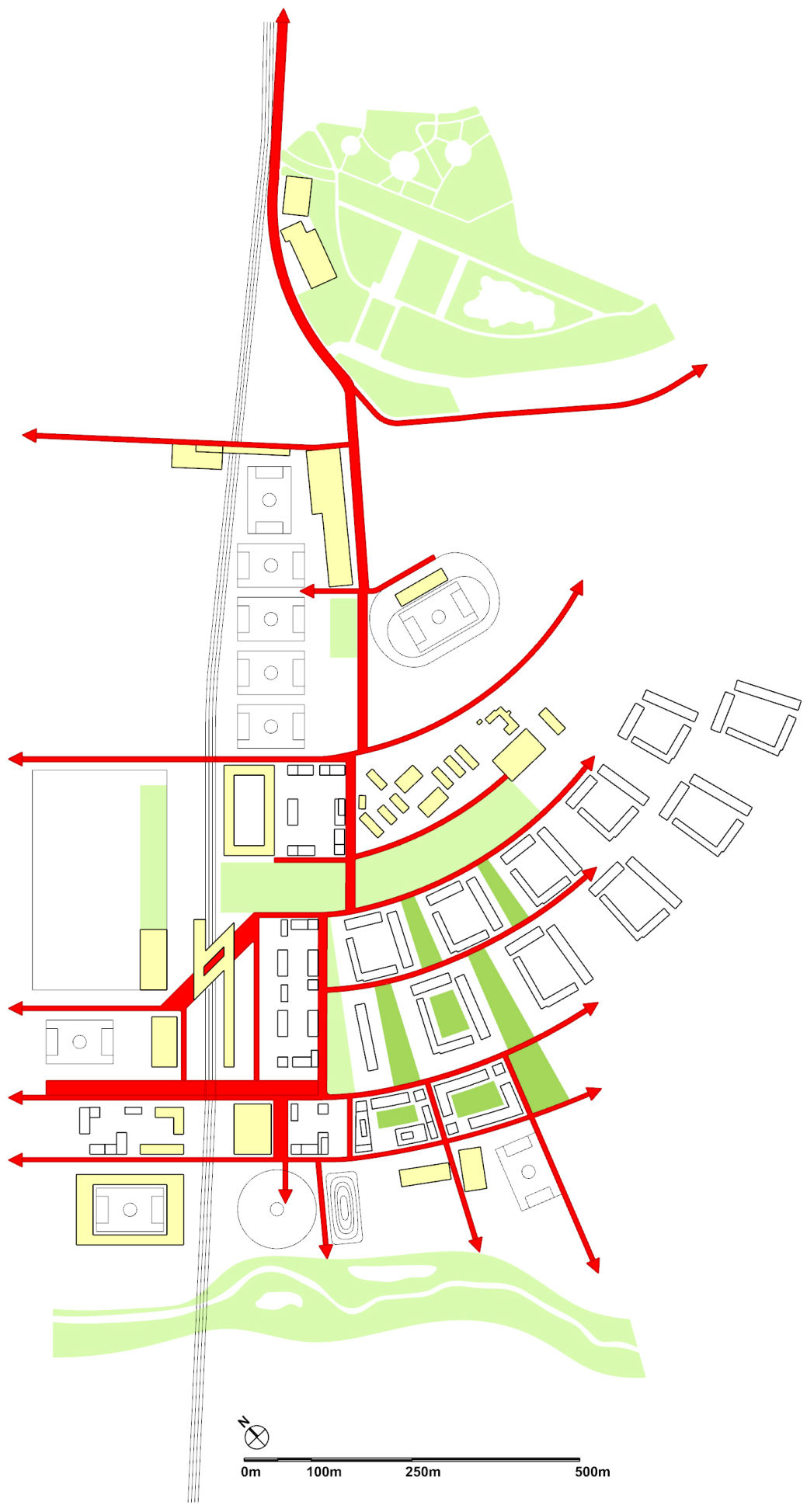 Link to the center of the city throughout Stadsparken and continued on the Vastanvag which is slightly adjusted. Along this NE - SW connection on each side, a series of buildings and areas of public interest (marked in yellow) already exist or can be proposed in the future. 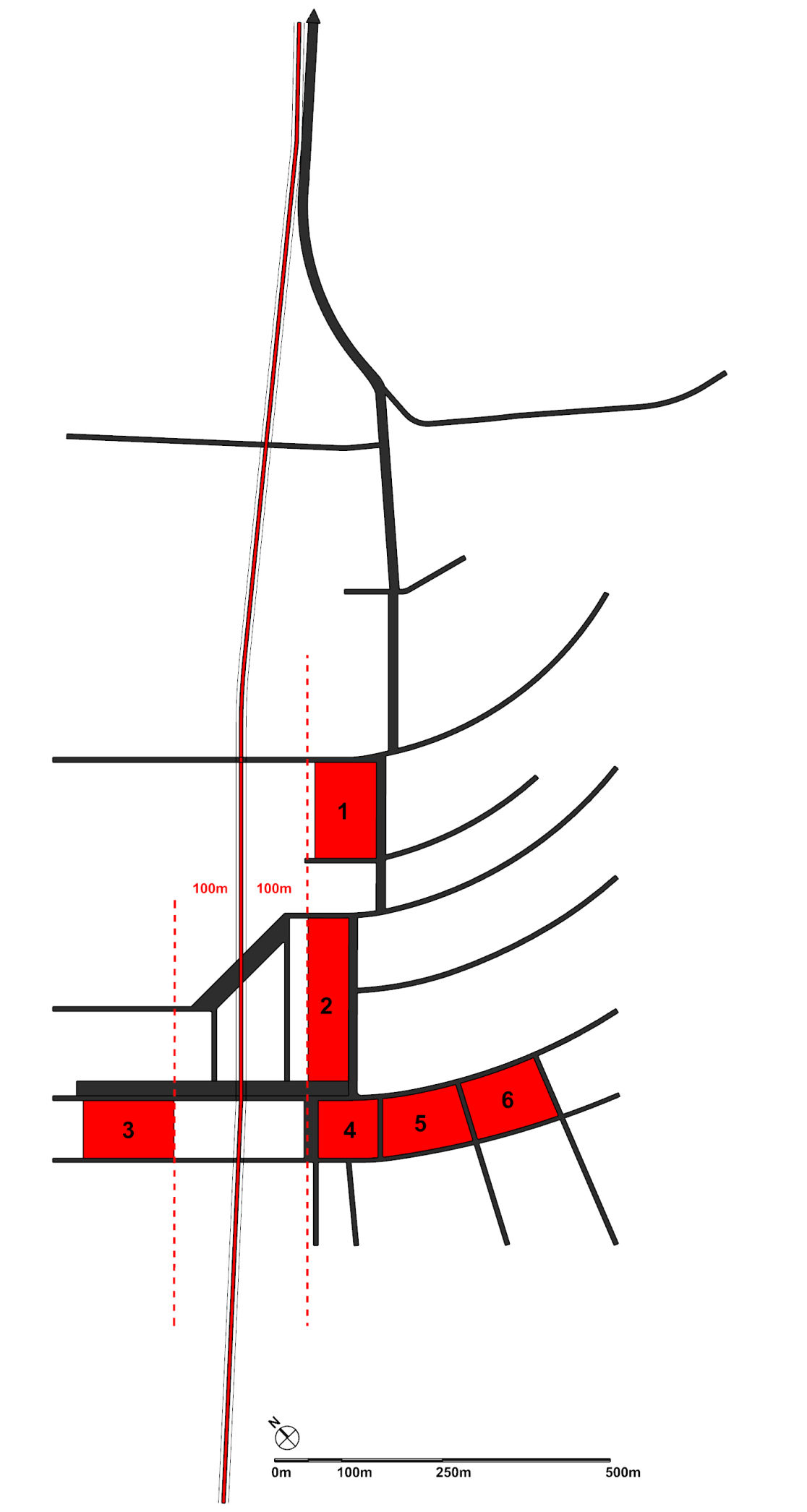 Distribution of 6 residential clusters. They keep a distance of 100m from the rail tracks. 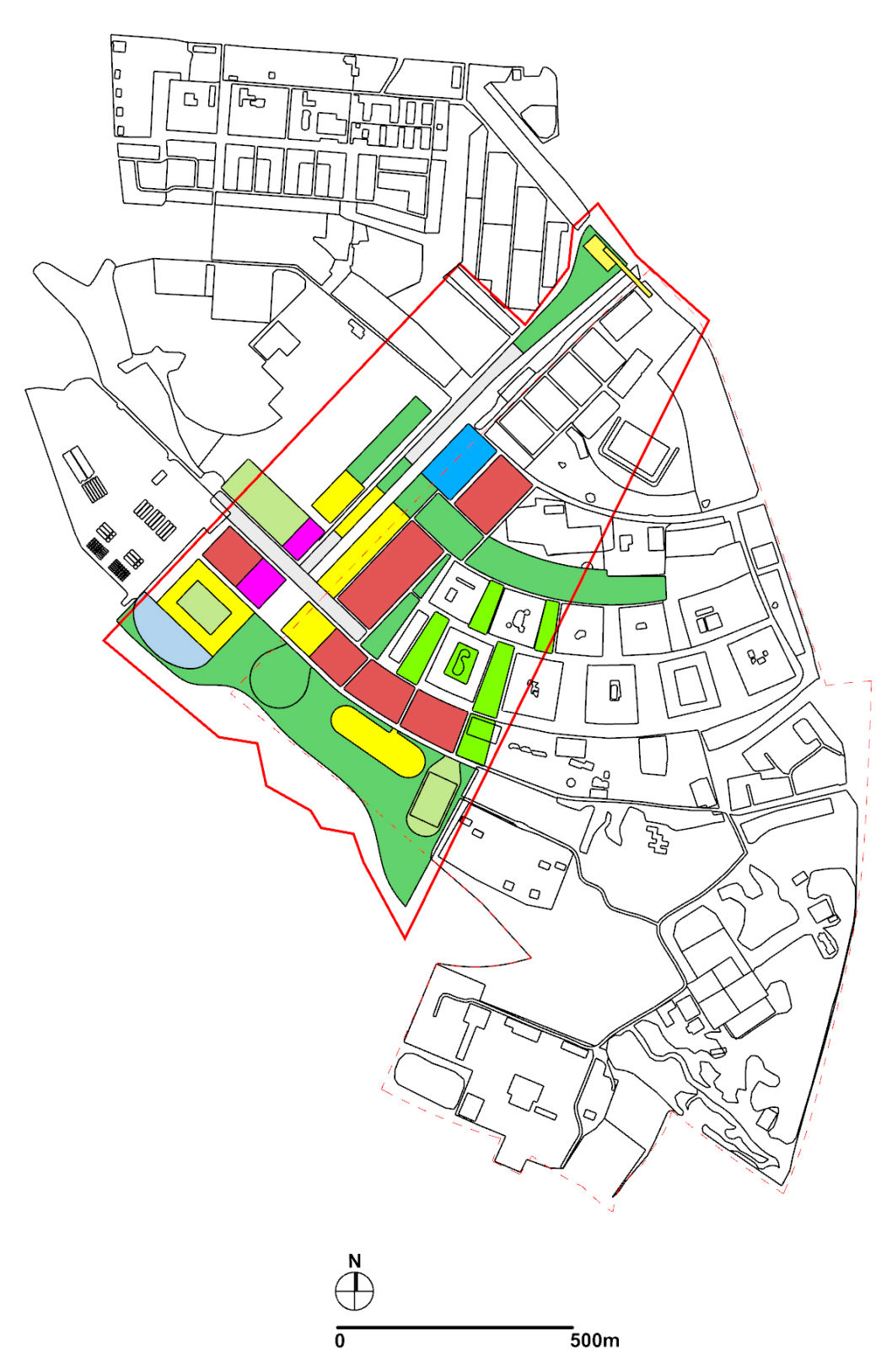 The proposed volumetric typology differs from the old residential complex: more permeable and extroverted, meant to become attractive not only for the local residents but also for the whole city.

In total, 6 residential clusters are proposed, consisting of 28 high buildings (of 11, 13 and 17 levels) and several low buildings and temporary structures at street level. Together they define interior plazas, sheltered from the wind and partially covered by shaders and pergolas. The street levels of all buildings are meant to host shops, restaurants, street kitchens. urban markets, etc. Cluster 3 is composed together with two office buildings and clusters 5 and 6 are dedicated to gardening activities. All buildings have a minimum distance of 100 meters from the rail tracks. The main vertical circulation is oriented towards the noise source. 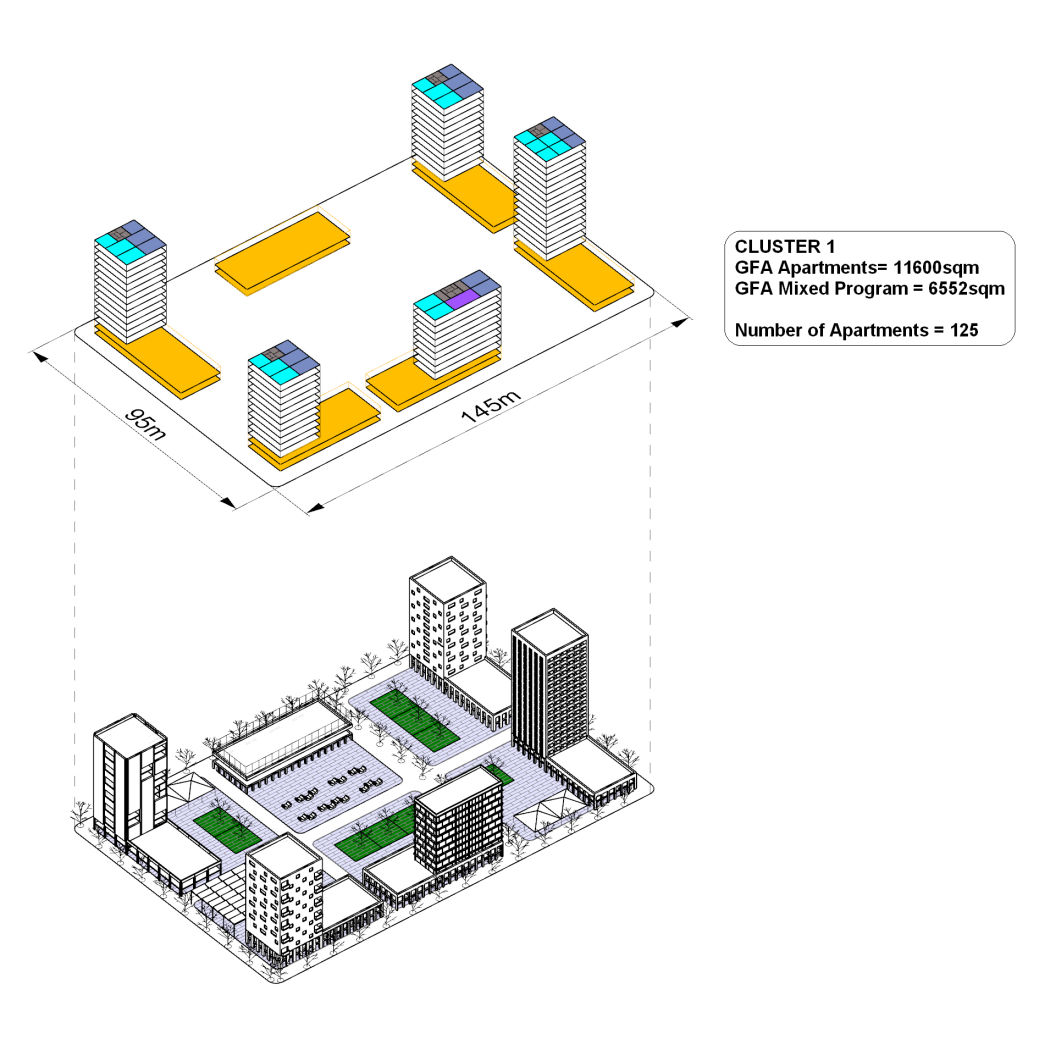 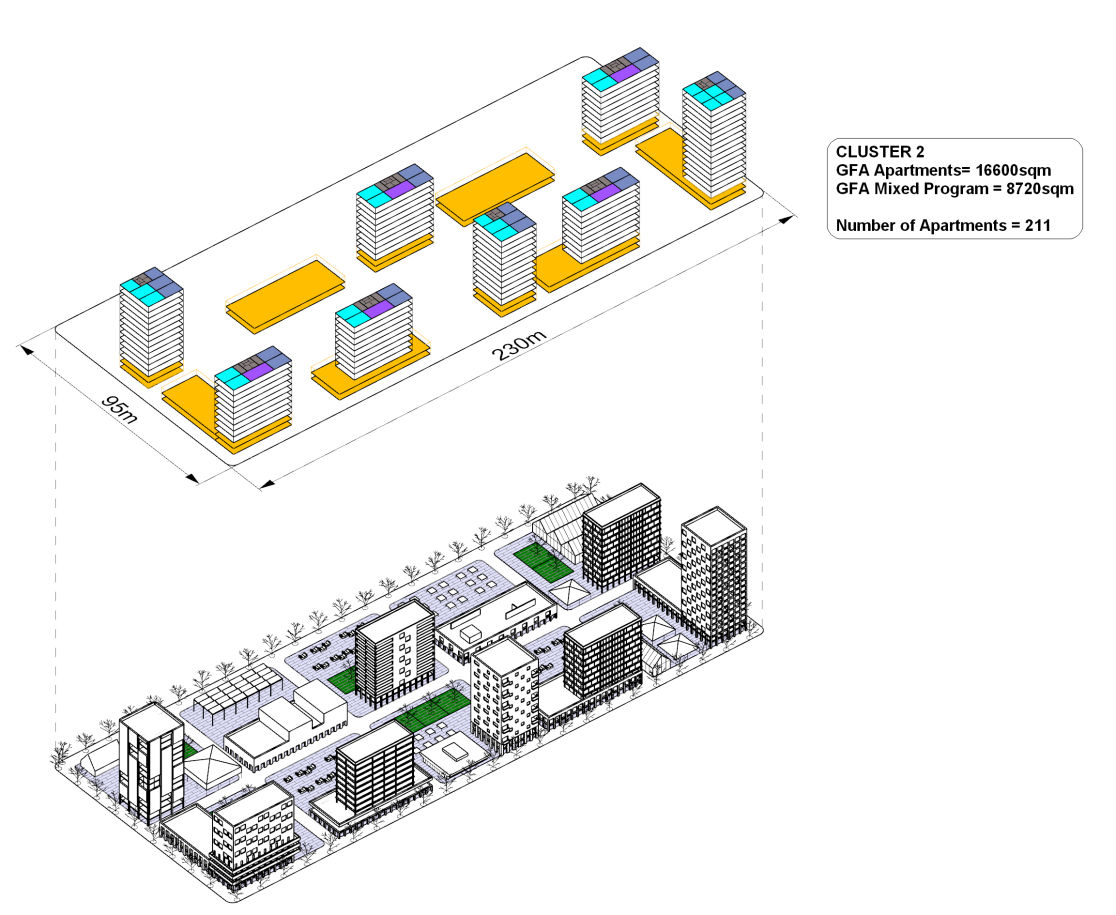 Several types of building floor plans were studied, that can accommodate several configurations of apartments..

The 6 residential clusters are surrounded by buildings and areas of public interest (marked yellow) . The gardens, which now are to be found on the site, were relocated within the old Klostergarden residential complex. If they become available for rent, gardening could bring people from around the city to Klostergarden.

Lund Business Park could be partially transformed to host a green garden on the roof, and more public spaces on the side facing the rail track and future Rail Station. Nearby, a new office buildings are proposed. Together they could encourage movement of pedestrians and bikes over the rail tracks and facilitate future development towards Vaster.

The rail tracks can be crossed in 5 points:

39692 sqm of GFA to mixed program, commerce services etc, situated on the lower levels. This areas are meant to serve the new residents, the existing Klostergarden residents and possible new visitors from the city. This grid of public spaces can accommodate complex, urban environments, with increased program flexibility. Being in a close relation with the future inhabitants, those spaces create a sense of community and define a character for the area.

Above: View over the future Rail Station, that can become a crossing point over the railtracks for pedestrians and bikes. Lund Business Park could be partially transformed to host a green garden on the roof. A large urban plaza spanning perpendicular to the rail tracks connects the NW-SE areas with an underground passage.

An activity park is proposed close to Höje River incorporating a large flower garden as an homage to Carl von Linné.