Today there are more than 50.00 active coal plants in the world and power demands are still rising. By 2030 fossil fuel power stations will account for 85% of the global energy market. Modern coal power plants pollute less that older designs due to new technologies that filter the exhaust air. Still they remain the main cause for acid rain, air and water pollution, and contribute to global warming.

Power plants are no better than 50% efficient. That means that the power delivered as electricity is equal to the power released into the environment as heat. Fossil fuel fired power plants use large cooling chimneys to release waste heat to the ambient atmosphere by the evaporation of water. The heat energy absorbed by water as it turns into vapor is later released into atmosphere whenever condensation occurs.

But the main reason concerning the coal plants is flue gas exhaustion. By burning coal, the plant is producing carbon dioxide, nitrogen oxide and sulfur oxide. These pollutants are released into the environment through the thin chimneys known as flue-gas stacks. Later they react with the atmosphere creating sulfuric, nitric and sulfuric acids which fall as rain. It is known that both flue gases and water vapors released by power plants have a big impact on the environment.

To reduce the impact of the plants, their exhaustions must be isolated and filtered before releasing them into the atmosphere. But to cope with such a large volume of gases and vapors huge containers must be designed.

The carbon and vapor capture and filter devices placed on top of the chimneys measure 1000m height and have a volume of almost 10 million cubic meters. To sustain such a large structure, the design relies on the waste heat produced by power plant. Some of the unused and hot air will fill the air sacs measuring 1 million cubic meters each, thus making the structure float 100 meters in the air, where the air currents are steady.

The structure is made out of multiple carbon-fiber steel props held together by a carbon-fiber steel mesh. The props are anchored in the existing foundation of the power plant. The mesh is then covered by a lightweight skin, a waterproof elastomer that isolates the gases and vapors from the environment. The gases and vapors do not mix, thus the risk of acid cloud formation is eliminated. The skin has an area of 300000 square meters and is equipped with photo-voltaic cells, LEDs and air quality monitoring sensors. 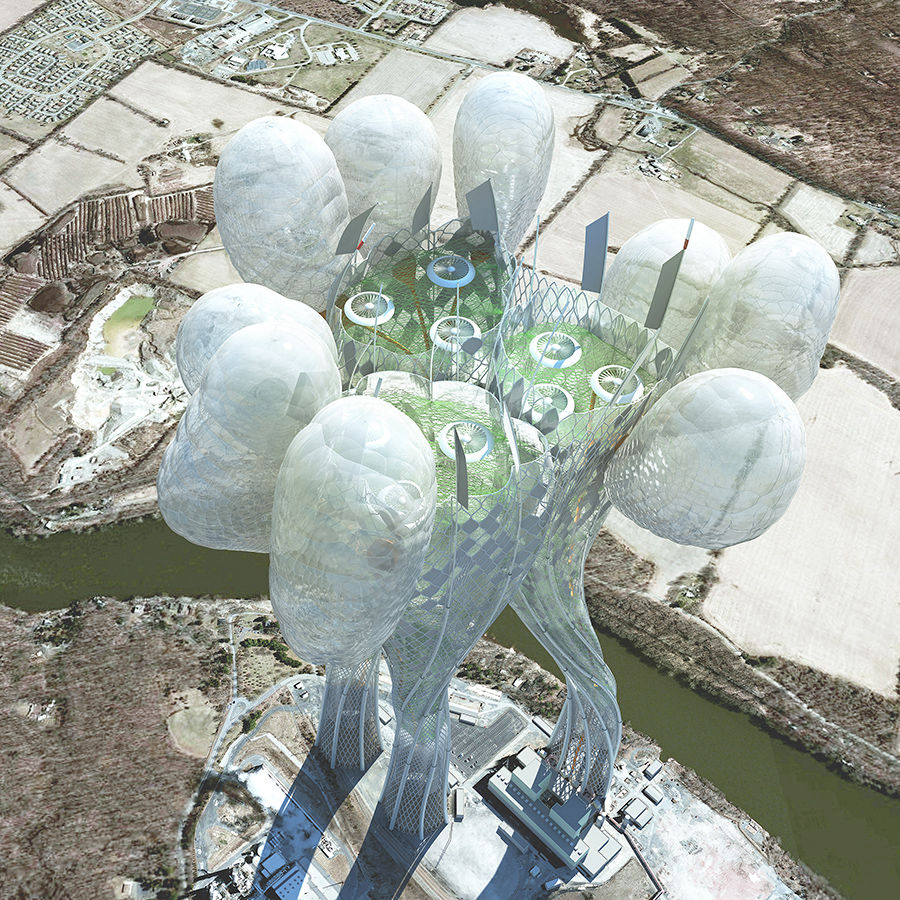 Power plants are placed near the cities, most of the inhabitants are not aware of their existence and impact. The main role of the LEDs that shine vertical patterns is to make people aware of their power demands and what these imply. The patterns will change according to their inner and outer air quality, monitored by sensors.

Inside these 1000 meter tubes various types of air filters with various densities are placed at different heights. The lower filters for CO2 exhaustions use Synthetic Carbon Fixation techniques while the upper ones are Bio-Filters. The filters placed on top of the cooling chimneys prevent the vapors from reaching the atmosphere. They are made of horizontal air pipes connected only to the exterior. The vapors condensate on them and the resulting water is gathered and distributed back at the base.